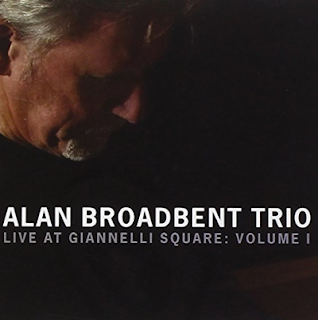 A couple of years ago, when Volume one of this music was issued, my review said, in part, that an apparent “Volume two” would be welcomed and anticipated with delight. Well, here it is. By now you’re probably aware that for me, Broadbent occupies the top rung of the jazz piano ladder. His playing is a listening adventure that gathers in the glories of J.S. Bach, Chopin, Lennie Tristano, Bud Powell and Bill Evans. But mostly it’s all about Broadbent and his consistency in providing music that swings and is beautiful. Once again, he’s with long-time associates Putter Smith, bass, and Kendall Kay, drums, and he writes another chapter in just what the classic piano trio is all about. His peerless interpretations of two standards, “Yesterdays” and “You Don’t Know What Love Is,” get this set off to a stirring beginning. They’re followed by the first of four original compositions: a medium tempo exercise in the blues called “Blues In ‘n Out.” “Wandering Road” is his musical statement on one aspect of the life of a musician. George Shearing’s outstanding composition, “Coneption,” follows. It’s a rarely heard gem and Broadbent makes it an album highlight. Always an admirer of the richness of Tadd Dameron’s compositions, Broadbent then launches into “Sing a Song of Dameron,” a beauty. But then, beauty was a Tadd trademark. The session is completed with “Three For All,” Broadabent’s bright and bouyant take on the changes to “Just Friends.” Let me simply state it this way: Alan Broadbent is my miracle piano player. Find out for yourself by buying this CD. And don’t miss hearing him in person for two nights, August 28 and 29, here in River City.
Chilly Bin Records; 2012; appx. 60 minutes.
Posted by Music Education For All at 7:57 PM