Tardo Hammer "Swinging On A Star" 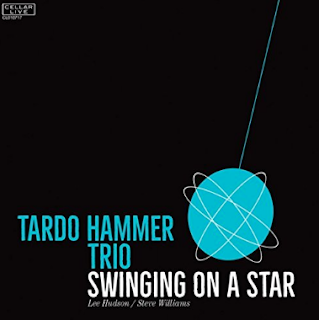 As we approach eight years of producing piano concerts at Portland's Classic Pianos, one of the standout evenings occurred on October 26, 2012. Tardo Hammer was in town and he mesmerized an audience of beguiled bebop believers. To my ears, Hammer is a willing disciple of Bud Powell, Tadd Dameron and Barry Harris. Said another way, it's not how many notes one plays. Rather, it's all about playing the right ones. And Tardo Hammer is a master of his craft in a trio session featuring Lee Hudson, bass and Steve Williams, drums. Here's the word on a few highlights: The CD opens with "Gone", a Gil Evans remake of a minor theme from Porgy and Bess. Two bop evergreens, "Little Willie Leaps" and "Monk's Dream", are tailor made for Tardo. The standards include some extended solo space for Hudson on the title tune "Swingin'" On A Star"; a delicate and tender "How Are Things In Glocca Morra"; and the surprise of the set, Harry Warren's old timer, "I Found A Million Dollar Baby". A gorgeous bonus here is Billy Strayhorn's rarely heard and oddly titled beauty, "A Ballad For Very Tired And Sad Lotus Eaters". Strayhorn always took a back seat to his boss, Duke Ellington. But in terms of genius they were equals. Several additional tunes complete an album that is five star real deal piano trio perfection.
Cellar Live; 2017; appx 46 min.

Posted by Music Education For All at 1:30 PM