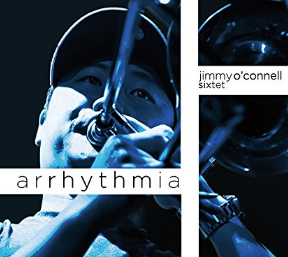 Arrhythmia; Jimmy O'Connell, trombone
Detroiter turned New Yorker in 2009, Jimmy O'Connell is one of the new generation of super jazz talents who abound in the Apple. His no nonsense, no goofiness "sixtet" is made up of equally enthusiastic young players on alto, guitar, piano, bass and drums. O'Connell's eight tune menu is nicely balanced between five of his own compositions and three from others composers. As an example, the disc opens with "Lament", a tribute to one of his icons, trombone master J.J. Johnson. Completing the familiar fare are Cedar Walton's "Bolivia" and a tender O'Connell feature on "In The Wee Small Hours Of The Morning". It is also worth noting that O'Connell's five originals reflect solid melody lines, a slice of wit here and there, and the primo musicianship so easy to spot among dedicated, honest, straight ahead jazz cats like these!