Four In One; Heads Of State; (a quartet) 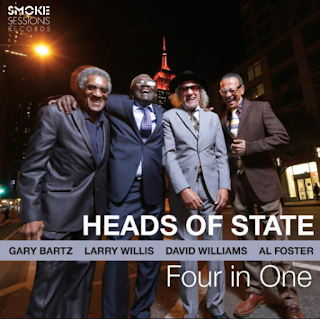 Here are four well respected veterans of the jazz life, all of whom have earned the collective name Heads Of State. Gary Bartz, alto sax; Larry Willis, piano; David Williams, bass; and Al Foster, drums, provide an energetic workout on eleven tunes, well balanced between standards and original material. Let's take a look at a few album highlights. The opener, "Four In One", brings some new harmonic luster to the rarely heard Monk tune. "Moose the Mooch" is a Charlie Parker bop classic with wit and fun intact. A couple of tunes "owned" by Miles Davis, his own "Sippin' at Bells" and John Lewis' "Milestones" provide further bop flavor, and Bartz makes sure we get a silvery unaccompanied verse to the Gershwin beauty "Someone To Watch Over Me". "Freedom Jazz Dance", a soulful Eddie Harris piece complete with Al Foster's backbeat, is perhaps the edgiest tune of the set. On all these and a few added originals there's a strong, cohesive feel to this album. One can hear that all the players were "on" for this session. It all comes out in the music. 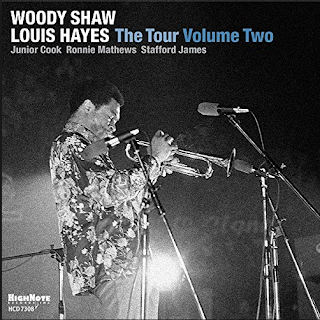 The Tour, Vol. 2 - Woody Shaw, trumpet; Louis Hayes, drums
Thankfully, High Note Records seems to find ways to access frequent but previously unreleased live concerts by a variety of jazz stalwarts. This time we go all the way back to 1976 and 1977 for a collection recorded at various locations in Germany and Belgium. For the record, the quintet is co-led by trumpet star Woody Shaw and drummer par excellence Louis Hayes. Shaw was a huge talent, often virtuosic in nature. His trumpet chops were controlled but fiery; his solos both compelling and inventive; and his ballad playing often simply something to behold. His career was cut short by a tragic accident, so he leaves a modest number of recordings. That in part is what makes this CD so welcome. On almost all material, the two co-leaders are joined by Junior Cook, tenor sax; Ronnie Mathews, piano; and Stafford James, bass. The six tunes are evergreens of the art form with titles like "All The Things You Are", "Night In Tunisia", "Invitation", "'Round Midnight" and more. This is heavy duty hard bop and not for the uninitiated or faint of heart. Woody Shaw was a ball of fire. Who knows where a longer life would have taken him? But he sure gave it his all while he was among us.