Professor Cunningham And His Old School Swing It Out! 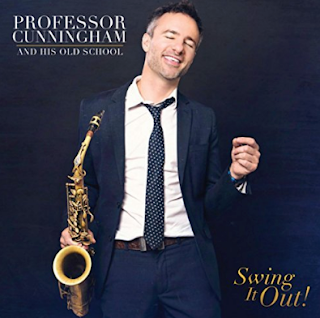 Multi-reedman Adrian Cunningham is back at it, this time with a swingin' septet. And once again he shows us the delight of finger snapping rhythms and tunes older than your grandma's antique samovar. Whichever instrument Cunningham chooses on a given song, he's a marvelous, spirited player and a virtuoso technician. He even sings a bit as you'll discover on "I Can't Give You Anything But Love", "Caldonia", "Be My Life's Companion", and even "Waltzing Matilda". On the instrumental side of the ledger, he and his enthusiastic friends cook up oldies like "Stompy Jones", "All Of Me", "Caravan", and even Jackie Gleason's TV theme, "Melancholy Serenade". The arrangements sometimes dip a bit into a happy Dixieland bag, but for the most part this is feel good music that swings effortlessly from note one. Cunningham's musicianship and devotion to his chosen style speak for themselves.
Arbors, 2017; appx. 56 min.
Posted by Music Education For All at 8:23 AM No comments: 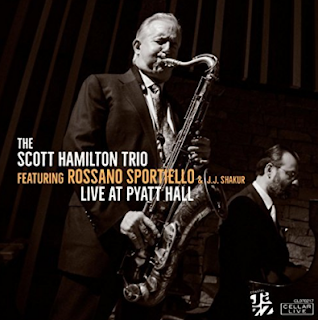 I've heard it said that the hottest current musical (?) is called Hamilton. Well, not to be out of the loop, here's yet another "Hamilton" review. This time it's Scott Hamilton, a tenor player who in his youth chose not to tread on Coltrane Blvd. Instead he followed the style of luminaries like Don Byas, Coleman Hawkins, Guy Lafitte, and most of all, Ben Webster. On this stunning live performance he heads a trio with the rapidly rising Rossano Sportiello on piano and J. J. Shakur on bass. Scott is a longtime devotee of the American Songbook. So it's no surprise that we are treated to such gems as "Tangerine", "Three Little Words", "Darn That Dream", "Old Fashioned Love", "You Do Something To Me", and a pop chart from back in the day, "Nel Blu Dipinto Di Blue" (aka "Volare"). A more recent arrival on the list of unforgettable tunes is "Estate"; Scott's breathy version is something to behold. Sportiello, an expert in the stride-swing arena, provides solid, literate, subtle accompaniment, and his solos sparkle with delight. The same may be said for bassist J. J. Shakur. Hats off to Scott Hamilton for his dedication to the music he loves. The world needs to know that musically, he and his namesake, Jeff, are the Hamiltons worthy of the world's attention.
Cellar Live; 2017; appx. 72 min.
Posted by Music Education For All at 8:17 AM No comments: 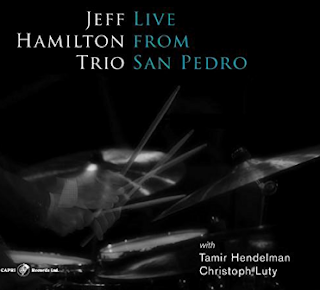 When a new Jeff Hamilton Trio album comes along we know for sure what we're gonna get. Unrelenting swing, the highest caliber of musicianship, real deal jazz from note one, and a guarantee that we'll be happier and musically fulfilled after note last. Jeff has pulled off this miraculous task with every pianist he's ever worked with from Gene Harris to Monty Alexander to Larry Fuller and now to the phenomenal, Oscar influenced, Tamir Hendelman. Hamilton's bassist, Christoph Luty, brings a Ray Brown-like enormous and rich sound to the proceedings. And then there's Jeff, the peerless drummer who toils in the spirit of his hero, Shelly Manne. On this beautifully conceived set, Jeff, Tamir and Christoph cover all the bases. In the groove department there's the opener, "Sybille's Day" a tour de force written by Jeff for the wife of a personal friend. Or how about Monk's "In Walked Bud", which starts rather sedately; then Tamir turns up the heat and, well, hello Bud! Two John Clayton pieces follow: John wrote the soulful back beat feature "Gina's Groove" for his daughter, and "Brush This" is John's ode to his great friend Jeff. Without a doubt the surprise of the set was "Gary, Indiana" which many of you will remember from Meredith Wilson's The Music Man. The trick here is that "Gary, Indiana 2018" comes to us wrapped in joyful Latin attire. On all these and more, the Jeff Hamilton Trio has struck gold again. But then, don't they always?
Capri; 2018; appx. 59 min.
Posted by Music Education For All at 8:13 AM No comments: 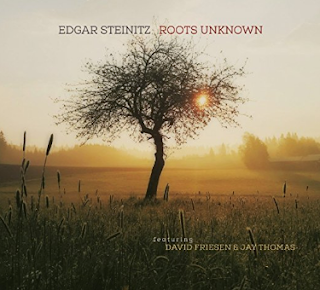 This is a recording of distinctly Jewish music, but unlike other attempts at this sort of thing it does not come off like your cousin's Bar Mitzvah band. Not when the arrangements are so well crafted, the ensemble work so intricate, and the solos so skilled and respectful. Edgar Steinitz has reached out to some sympathetic players including Portland bassist David Friesen and Seattle phenom Jay Thomas on trumpet, flugelhorn, flute and tenor sax. Thankfully, the "Jewish national anthem", "Hava Nagila", is nowhere to be found here. But Israel's national anthem, Hatikvah (The Hope), is played here; and even with a bit more tempo than usual, it's a winning rendition. Other highlights, both from the Shabbat (Sabbath) service, included "Oseh Shalom" (Peace And Wholeness) and "Mi Shebeirach", a prayer for the healing of mind, body and spirit. The thing that is so impressive here is that these songs are approached seriously and fully within the jazz context. Very hip Jewish music this is, but the Mickey Katz hi-jinx was set aside for another time.
OA2 Records; 2018; appx. 58 min.
Posted by Music Education For All at 8:07 AM No comments: 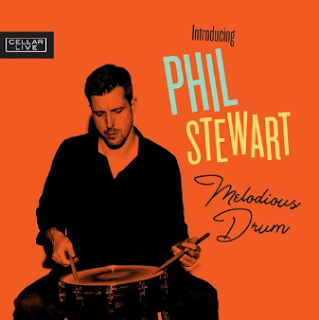 Let's start out by wondering if the title of this CD is a veiled reference to one Thelonious Monk. Must be, in my not so humble opinion. Be that as it may, rapidly ascending New York drummer Phil Stewart has assembled some fellow Gotham monsters for this session. Probably the two most familiar names are Stewart's brother, Grant, a sensational tenor sax man, and trumpet great Joe Magnarelli. The remainder of this equally impressive cast includes Chris Byars who alternates with and sometimes joins Grant Stewart on tenor; in the pocket pianist Sacha Perry; and another new name to me, bassist Paul Sikive. Three bop era classics are featured here. Dizzy's "Manteca", Bud Powell's "Dance Of The Infidels", and the aforementioned Monk's rarely heard "Eronel" (spell it backwards!). An absolute fave is George Coleman's "Apache", a ripping rewrite on the changes to "Cherokee". The surprise of the disc is the former Tony Bennett hit "This Is All I Ask", featuring Grant's sensuous tenor sax. All told this is a no gimmicks, straight ahead jazz performance by gifted players, all of whom are keeping the flame bright and alive.