Alexander Claffy "Standards: What Are You Doing The Rest Of Your Life?" 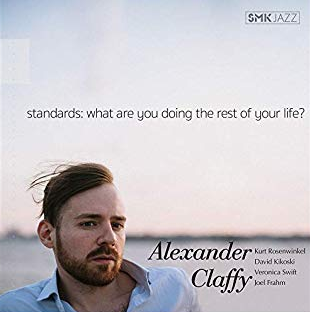 Think about it. In an age where jazz musicians are largely insistent on sharing their original music with the world (and that's perfectly okay), it's something of a rarity to see an entire album of standards. But here they are, under the leadership of bassist Alexander Claffy and with some top of the mountain talent along for the ride. Among others, David Kikoski on piano, Kurt Rosenwinkel on guitar and, guesting on a few tracks, Joel Frahm on tenor sax. The standards chosen for this session cover several decades of writing, and include music from Cole Porter to Wayne Shorter; from Michel Legrand to Duke Pearson, and from McCoy Tyner to John Lennon. The arrangements, not too surprisingly, are quite contemporary and occasionally a bit adventurous for me. Be that as it may, "Blues In The Closet", Devil's Island", "Just One Of Those Things", "You Must Believe In Spring", etc., are classics, and can sustain an examination from the outside in.
SMK Jazz; 2018; appx. 66 min.
Posted by Music Education For All at 11:25 AM