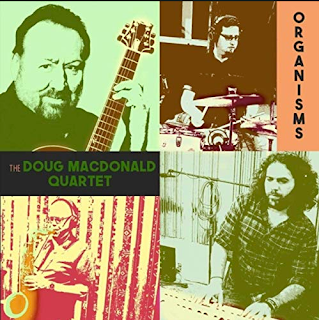 As you probably know by now I'm not the most wild-eyed fan of organ jazz. But it's easy to recognize when it simply works. Carey Frank is a Hammond B3 player of uncompromising skill and subtlety. And it should be added that leader Doug Mc Donald and Frank are very much on par in communicating musically. Veteran L.A. tenorman Bob Sheppard adds an appropriate bluesy contribution, and drummer Ben Scholz adds supportive zest. The ten tunes examined represent a balanced selection of standards and blues infused choices. Perhaps my two favorites are the mostly overlooked ballads "Sometime Ago" and "Too Late Now"; both are examples of top echelon songwriting. How nice to hear them once again. Other familiar "hits" include "It's You Or No One"; "Poor Butterfly"; "On The Alamo"; a medley of "Nina Never Knew" and "Indian Summer"; and Harry Edison's evergreen, "Centerpiece". Doug McDonald's superb musicianship, along with that of his colleagues, is something to be admired.
Self-produced; probably 2019; appx. 44 min.
Posted by Music Education For All at 3:57 PM