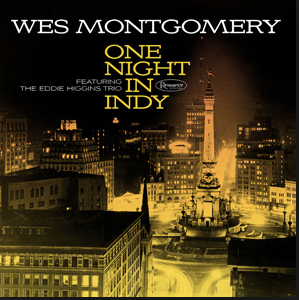 For me, it's a toss-up. But I can come up with three names (more if I were pressed) who might be considered as the top dog guitarist of the mid-20th century era. How about Kenny Burell, Jim Hall and Wes Montgomery? So, how great a delight is it to unearth this previously unissued set recorded live in an Indianapolis jazz club way back in 1959?! To make things even sweeter, the pianist on the date is Chicago hero Eddie Higgins, a real champion of elegance. The rhythm section is completed by drummer Walter Perkins and, despite concerted effort to identify him, an unknown bassist. By 1959, Wes's style was well-defined. It featured distinctive single note passages, subtle chord work, and his trademark brilliance in playing in octave style. Higgins also gets a chance to shine on some solo passages which show his allegiance to standouts like Teddy Wilson and Hank Jones. The tunes, six in all, range from Neal Hefti's "Li'l Darlin'" to Monk's "Ruby, My Dear" to Duke's "Prelude To A Kiss" and more. I for one could listen to music like this all day long and never tire of it. We owe a debt of gratitude to Resonance Records for bringing this and numerous other treasures to our attention over the past decade.

Posted by Music Education For All at 8:48 AM