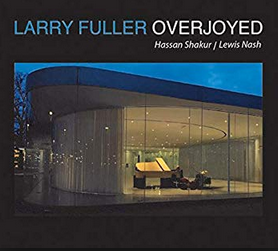 Overjoyed is a completely fitting title for this former Seattle resident who follows the premise that it's okay to swing! Proof lies in Fuller's lengthy associations with Ray Brown and Jeff Hamilton, both of them among jazzdom's swingingest. Fuller is, to my ear, a disciple of a jazz god named Oscar Peterson. On this delicious CD, Fuller honors Oscar with Bossa Beguine, one of Oscar's choice but lesser known compositions. Keeping things in the family, he also pays tribute to bassist Brown with Ray's tune "Lined With A Groove". Among the standards here are delicately rendered choices like "How Long Has This Been Going On", "Mona Lisa", and "Never Let Me Go". And Fuller's trio, with Hassan Shakur on bass and Lewis Nash on drums, also finds time for a few from "The Real Book" in Wes Montgomery's "Fried Pies"; Ray Bryant's rarely heard "Cubano Chant"; and even the jazz hit "Got My Mojo Workin'". A few of Fuller's well crafted originals complete the album of twelve titles in all. As he has done on previous releases, Larry Fuller keeps the faith, playing great tunes within an honored jazz tradition. Capri Records does it again!
Capri Records; 2019; appx. 54 min.
Posted by Music Education For All at 7:20 AM