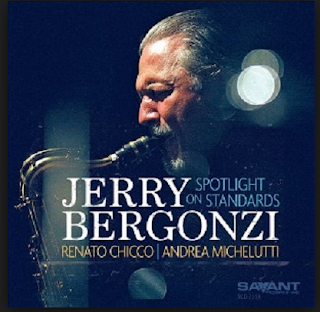 Spotlight On Standards; Jerry Bergonzi, tenor saxJust ask nearly anyone in Boston's jazz community. You'll learn that Jerry Bergonzi has been a local hero for years. A highly respected faculty member of Beantown's Berklee College Of Music, Bergonzi has earned his high standing. On this CD he takes a slight detour from his usual path of original compositions. He actually takes on five well known standards including the Sinatra hit "Witchcraft" and solid staples like "Dancing In The Dark", "Out Of Nowhere", "Come Rain Or Come Shine" and even "Stella By Starlight".  The remaining four tunes are Bergonzi's own creations, hence the album title Spotlight On Standards. He works in a trio setting with Renato Chicco on B3 organ and Andre Michelutti on drums. Notice, interestingly, the absence of a bass player on the session. Chicco is a crafty organist who doesn't fall into the soul attire of too many B3 guys. That said, I'd have preferred a piano over organ. Bergonzi, to be sure, offers a spicy presentation, employing a thick tone sometimes a bit like that of Joe Henderson. So go ahead and find out what Bostonians have known forever---that Jerry Bergonzi is a monster of the tenor saxophone.Savant; 2016; appx. 63 min.
Posted by Music Education For All at 7:55 AM