Shirley Horn "Live At The 4 Queens" 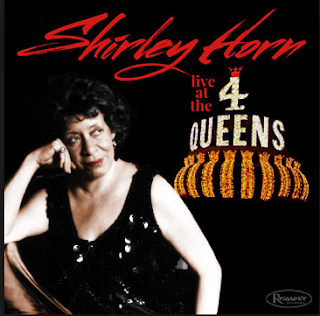 Live At The 4 Queens; Shirley Horn, Piano and Vocals Shirley Horn was one of those exceptional jazz singers who unfairly flew under the radar for far too long. When she wasn't a stay-at-home mom she managed to record a handful of albums, none of which got very much attention. That all changed in about 1987 with the first of many sessions for Verve. Suddenly, Shirley Horn was no longer the exclusive darling of musicians and the hippest of jazz fans. This previously unreleased gem was captured at The 4 Queens, a Las Vegas casino, in 1988 (imagine! Jazz in Vegas!). Shirley and her long time colleagues, Charles Ables on bass and Steve Williams on drums, deliver a memorable set of nine tunes: six vocals and three instrumental pieces. She gets things underway with Randy Weston's classic "Hi-Fly". Next comes her vocal on "You'd Be So Nice To Come Home To". As always she's about a mile behind the beat, but she's the only singer who makes this little trick work to perfection. Other vocals include "Lover Man", "Just For A Thrill", and my personal fave, the rather obscure "Something Happens To Me". She also works her vocal magic on two Antonio Carlos Jobim evergreens, "Meditation", and "Ipanema". The date closes with an Oscar Peterson burner, "Blues For Big Scotia". And don't lose sight of a fifty-six (!) page booklet loaded with info, photos and interviews. Resonance Records just keeps coming up with one unreleased treasure after another. And Shirley Horn, the brilliant, unique and uncompromising jazz diva, was herself, a treasure. Resonance Records; 2015; appx. 50 min.
Posted by Music Education For All at 8:00 AM