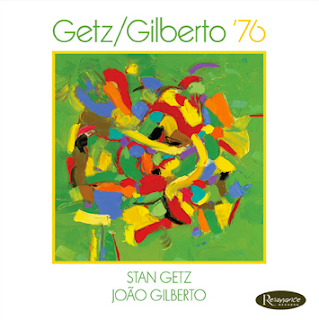 These two recordings are distinctly different in that one features exquisite Brazilian melodies sung by Joao Gilberto and the other is purely American jazz classics all the way through. But there are similarities as well. Both were recorded live at San Francisco's Keystone Korner in May of 1976. And in addition to the tenor exploits of the leader, both feature a solid and sympathetic rhythm section of Joanne Brackeen, piano; Clint Houston, bass; and Billy Hart, drums. Getz Gilberto '76 puts the silky guitar and soft, understated vocals of Gilberto in the spotlight. While "Getz gets" generous solo space, one might say this is as much Gilberto's album as it is Stan's. There are thirteen Brazilian charmers in all, and you'll know many of them. Getz, who could be a bit salty at times, would say in so many words that the bossa nova "thing" defined his career to a larger extent than he would have preferred. What can't be denied however, is that it was stately, romantic music. So put this CD on your shelf right next to all those Verve bossa beauties from long ago.


The second album, Moments In Time, features the Getz tenor with the same personnel on piano, bass and drums. The S G sound, recognizable in three or four notes, opens with a Harry Warren classic, "Summer Night". After a dreamy introduction the Getz horn soars and we're underway on a glorious straight ahead set. Other highlights include Horace Silver's "Peace", Dizzy's "Con Alma" and a beautiful obscurity by Jimmy Rowles and Johnny Mercer called "Morning Star". Stan Getz was a jazz superstar. Finding newly mined gold like these two albums is a most welcome surprise. They are additions, one might say, to a legacy already well secured.

Posted by Music Education For All at 11:25 AM