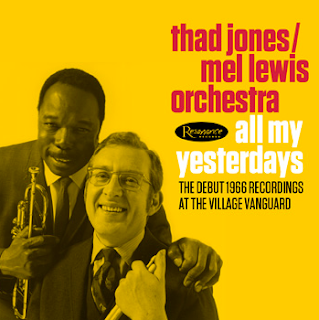 All My Yesterdays: The Debut 1966 Recordings At The Village Vanguard; The Thad Jones-Mel Lewis Jazz OrchestraFor fifty years this incredible collection of New York master musicians has held forth every Monday night at New York's jazz mecca, The Village Vanguard. Now known as the Vanguard Jazz Orchestra, these recordings go back to the beginning of this virtually unprecedented long run. At that time they were under the co-leadership of trumpet ace Thad Jones and the great drummer Mel Lewis. Both contributed arrangements and compositions for the orchestra. To describe their music in mere words is not easy, but I'll give it a go. This was first and foremost a JAZZ ORCHESTRA and not a "big band". The arrangements were dense and challenging. There were always surprising twists and turns. The ensemble passages filled the room with confident, in-your-face musicianship. The solos were generous in length, often demanding to pull off, and brimming with that urban, high flying "New York thing". It's understandable when your players, to name a few, include names like Hank Jones, piano; Jerome Richardson, Joe Farrell and Pepper Adams, reeds; Snooky Young and Bill Berry, trumpets; and Bob Brookmeyer and Tom McIntosh, trombones. These and a multitude of others swing through a two-CD set of mostly original material from the esteemed co-leaders. And don't overlook a 92(!)-page-booklet loaded with info and photographs. This beautifully produced set has never been released until now, thanks to the kind permission of the estates of Thad Jones and Mel Lewis. This is passionate, mind-blowing, head-turning music. In its day the Jones-Lewis Orchestra was one of a kind. Its influence remains nearly unchallenged to this very day. Get your ears ready for something special. This one's a MUST!Resonance Records; 2016; two CD's: appx. 49 min. and 75 min.
Posted by Music Education For All at 7:59 AM