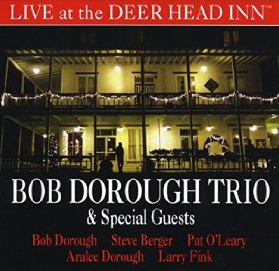 Surely you've heard of sportscasters say of superstars, "you can't stop him; you can only slow him down". At age 93 (well, only 92 at the time of the concert) nobody's able to slow down Bob Dorough. His ultra-hip voice is off of center but always playful. It just sneaks up on you and reels you in. On this delightful session he's joined by trio mates Steve Berger on guitar and Pat O'Leary on bass. Special guests Aralee Dorough, Bob's daughter on flute, and Larry Fink, harmonica, help out on selected tracks. But it's mainly Bob, the ultimate jazz hipster, who is all over the place on a wide variety of tunes. He opens with two standards, "The Touch Of Your Lips" and "Flamingo", and then reprises an old Sinatra hit, "Learnin' The Blues". From here he goes deeper into the blues well. "Casanova's Lament" is a Jack Teagarden blues with some not so subtle "R rated" innuendo. "Wily Wily Woman" is a Dorough original blues complete with enthusiastic audience participation. Other selections from diverse points on the musical map include "Alfie", "The Sweetest Sounds", and among others, Dorough's signature song from about 1955, "Devil May Care". Bob Dorough has for decades brought me as much pure jazz pleasure as anybody I can think of. May he be blessed with many more unstoppable years.

Posted by Music Education For All at 8:12 AM