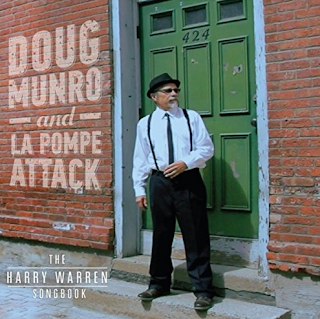 Harry Warren was a prominent composer during the 1920's, '30's and into the '40's. Just one look at all his hits and you'll be quite amazed, especially if his name is only vaguely familiar. Warren was also the great uncle of guitarist Doug Munro who has put together this Warren tribute. Munro decided on a swing style session in the manner of Django Reinhardt and Stéphane Grappelli. Nearly all the music was composed during that period, so it fits hand-in-glove as swing material. Munro plays with four different groups, all guitar dominated. Now to these Harry Warren titles. An impressive list it is, with such evergreens as "Jeepers Creepers", "I Only Have Eyes For You", "The More I See You", "September In The Rain", "At Last", "Serenade In Blue", and loads of others. If you love the Django era and style, grab this one up. It's great fun!
Got Music Records; 2017; appx. 57 min.

Posted by Music Education For All at 1:44 PM