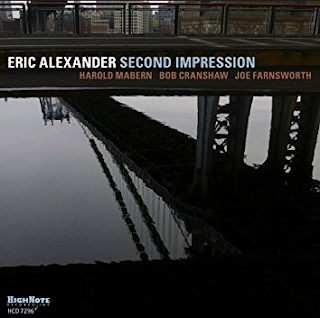 Second Impression; Eric Alexander, tenor sax
Many years ago I thought that Dexter Gordon, more than any other tenor man of his generation, made the instrument sound exactly as was intended. Among today's players I'd single out Eric Alexander for that designation. Alexander's tone is natural, perfect, practiced and highly satisfying. He is also a thoroughly dedicated real deal jazz musician who can spin you around with technique, but only when it's called for. Another test that he passes is that of choice of material. Alexander always offers a few originals, a bop classic or two, a ballad you long ago forgot about, and a couple of surprises nobody's given a thought to for years. You'll find it all on this well balanced session. The title tune is a cousin to John Coltrane's "Impressions". "So Many Stars" is a memorable melody by Sergio Mendes, and "Secret Love" at a bright tempo won't remind you of Doris Day's version. Fans of Wes Montgomery might recall "Full House", and all these years later, here it is again. The ballad feature is Matt Dennis' "Everything Happens To Me", a beauty that jazz musicians have long favored. To all these add several originals, all performed with passion and masterful musicianship. On that subject, Alexander's usual colleagues are all aces: Harold Mabern, piano; Bob Cranshaw, bass; and Joe Farnsworth, drums. But it's Eric Alexander whose tenor sax sounds just like what Mr. Sax had in mind when he invented it. I look forward to every Eric Alexander CD, and this one measures up to the best of them.