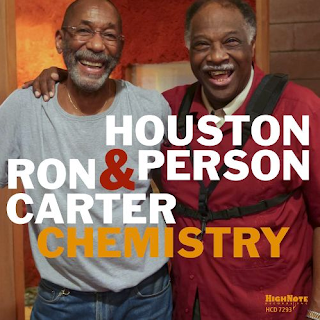 Chemistry; Houston Person, tenor sax; Ron Carter, bass
Outside of its obvious scientific usage, "chemistry" is usually a term associated with things like athletic team play. Odd that it isn't often applied in musical settings. But it is most approriate here. Houston Person and Ron Carter have done nearly all there is to do over decades of jazz leadership. But it takes an extra degree of jazz prowess and musicianship to pull off a duo recording such as this. There's no pianist to take a couple of choruses and no drummer to steady his colleagues. Not a problem for Person and Carter as they weave their spell on ten beauties from the American Songbook, most of them ballads. You can't go wrong with such winners as "Fools Rush In", "Can't We Be Friends", "But Beautiful", "I Can't Get Started" and perhaps my own favorite, "Blame It On My Youth". There's often a special intimacy to duets such as this. It is unmistakable here as two giants send shivers up your spine.